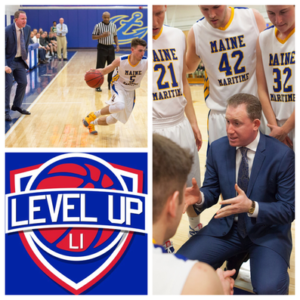 Coach David Muchnick joins the Level Up LI family as a trainer in his 17th year of college basketball as a player and coach. Muchnick was a 4-year player and 2005 graduate of SUNY Geneseo, a captain his senior season, and remains top-10 in program history in 3-point percentage. Currently, he is an Assistant Men’s Basketball Coach at John Jay College in Manhattan, assisting the Bloodhounds in all aspects of the program. For the last 3 seasons, Coach Muchnick was the Head Men’s Basketball Coach at Maine Maritime Academy. In his tenure rebuilding the program, he led the Mariners to their best conference record since 2010-11 and is responsible for the best 3-point shooting team in school history. Before Maine Maritime, Muchnick was the Interim Head Men’s Basketball Coach at the U.S. Merchant Marine Academy in Kings Point, NY where he was the school’s 2013-14 Coach of the Year. In addition to other coaching stops, Muchnick began his coaching career as the top assistant at SUNY Cortland from 2005-2008 and helped the Red Dragons to 2 20-win seasons and a NCAA Division 3 Tournament 2nd round appearance. Combined throughout his years, Muchnick has recruited and coached 17 All-Conference performers, 14 1,000-point scorers, 2 NCAA All-Americans and 2 international professionals.