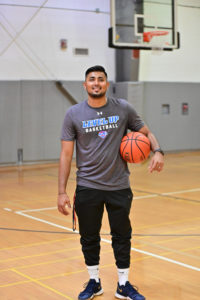 Coach Rich Rampersad started his high school career at Lehman High School in the Bronx. From there he went on to play for Berkely College. At Berkeley he received awards such as the team’s Most Improved Player and also participated in the USCAA’s Three-Point contest where he came in second place. The Knights won its conference twice in the years that he attended. After graduating Rich was an Assistant Coach for the Berkeley Knights. He is looking forward to helping players develop, improving their performance and most importantly, building confidence — both on and off the court.