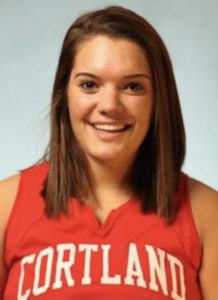 Coach Rosie played for Bethlehem Central High School where she was a 3 year varsity player starting in her sophomore year. In her junior year the team made it to the state finals and she was named the Sportsmanship Player of the Game Award. She also received the Defensive Player of the Year award that year. From there she played for SUNY Cortland from 2010-2012. Coach Rosie is currently studying for her masters degree at LIU Post in school counseling and hopes to one day be a high school varsity head coach.