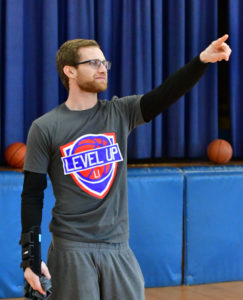 Coach Scott Moses attended UMass Amherst where he was the team manager for one year. He held various head coach and assistant coach stints in New England at Smith Vocational High School, Springfield Commonwealth Academy and Woodstock Academy. In the latter two highly decorated programs he assisted head coach Tony Bergeron. The SCA program placed over 25 players in Divisions 1, 2 and 3 colleges including 6 in Division 1. At WA the team was ranked #3 in the USA. He came back to Long Island to work as a graduate assistant for the Adelphi University MBB program. In two seasons at AU Scott helped coach the team to a 37-21 record.