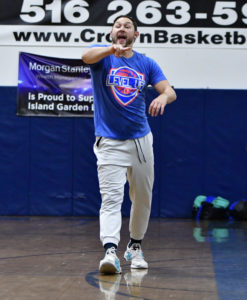 Coach Niehoff began his basketball playing career at West Islip High School where he was a 3-year starter on varsity and a 2-year captain. He finished his senior season ranked 3rd in Suffolk County in scoring and finished as one of the All-Time leading scorers there. He helped lead the program to the most successful season in 30 years and was then selected to represent the Long Island Region as a starter for the silver medalist Empire State team in 2004. From there, Carson continued his playing career at SUNY Cortland where he was a 3-year starter and selected captain for his Senior campaign. He finished on the 1,000 point scoring list and received All-SUNYAC honors his Senior season. After college, he was selected as a member of the Washington Generals basketball team that plays against the world famous Harlem Globetrotters. After that, he spent 2 seasons at St. Anthony’s High School as the Freshman boys basketball coach. As recent as 2016, he was the Varsity Head Coach at Inwood Academy in Washington Heights, NY. As a coach and trainer, Niehoff values dedication, passion and the willingness to expand players game beyond their limits, through versatility and having a strong basketball I.Q.