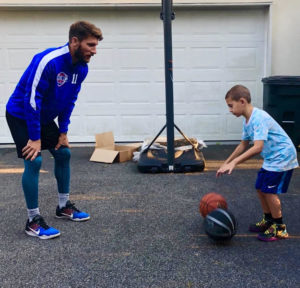 Coach Luke Wandrusch played at Chaminade High School and walked-on to D1 Loyola University Maryland. He played all 4 years that included a 2012 MAAC Championship and an NCAA Tournament appearance. After college Luke worked briefly in finance before moving to Germany to start his coaching career. He was an assistant coach of MHP RIESEN Ludwigsburg from 2015 to 2017 which included 2 playoff seasons and worked with NBA players such as Royce O’Neale, Jon Brockman and DJ Kennedy as well as coaches John Patrick and Martin Schiller. While living in Germany Luke also played in the German Regionalliga. In April he moved back to New York. He brings his international basketball knowledge and skills to Level Up.